The Artist’s Book has established itself as an irreversible cultural fact, as an artistic sensation and as an economic phenomenon. In the artistic field, it has become a legitimate genre that never stops updating its characteristics, recruiting an ever-increasing number of artists, and also developing different ways of publicity, creating workshops, and multiplying its exhibitions. In the field of the publishing industry, its appreciation is growing and it has already conquered a right of citizenship, as witnessed in a remarkable way since 1981 by the space reserved for the Artist’s Book at the Frankfurt Fair.

Myths of Creation is an edition of Alvaro Castagnino Art Gallery of Buenos Aires and Arte Dos Gráfico of Bogotá, Colombia. The edition of one hundred copies in Arabic numerals and twenty-five copies in Roman numerals, consists of six original etchings made in aquaforte and aquatint as well as five original serigraphs. Both the zinc and copper plates and the serigraphic matrices were made entirely by the artist. It also contains a frontispiece made of metal and a series of original vignettes. The texts were composed manually in Bodoni typography and the papers used are BFK Rives from the Arjomari house in France and handmade papers by Fabri Papel from Bogotá, Colombia. The editorial design is by Luís Angel Parra and Matilde Marín; the English translation is by Andrew Reid.
.

The myths of the different cultures were selected by the artist; the literary prologue is by Nelly Perazzo, member of the National Academy of Fine Arts of Argentina. Different aspects of the edition were in charge of Alina Molinari and Álvaro Navarro. It was finished printing in the Arte Dos Gráfico workshops in Bogotá, Colombia on the night of September 22, 1993 in a crescent moon.

The Je ne sais quoi of painting and art in general
Handwritten and unpublished texts by Luis Seoane.
Collected by Rosa Espineira Pan.
The texts were composed by hand in Gauthier and Marcellin-Legrand, printed by the atelier of the Livre de l’Imprimerie Nationale de Paris. Matilde Marín’s serigraphs were printed by Eric Seydoux in Paris, on Rives paper.
This edition includes 99 copies:
64 copies from 1/64 to 64/64.
25 artist copies and 10 numbered from I to X, reserved for employees and the French National Library.
In addition, a silkscreen suite of 125 copies was printed, numbered from 1/125 to 125/125 and signed by the artist.
Edited by Raiña Lupa, Galicia, Spain
The book was finished printing on March 30, 2001.

Labyrinths “Homage to Jorge Luís Borges” is a limited edition of five numbered copies, made with the suminagashi technique. Alejandro Geiler (paper) and Silvina Pérez (boxes) collaborated in this edition.
It was finished printing at the Gráfica Contemporánea workshops, Buenos Aires, Argentina, in April 1998.

Artist’s Book is a book created from photo performance, in which the artist presents herself as a reader and goes through a small copy published in black and white, where the geometric figures move within the sheets. The record of the action is photographic, consists of ten movements and alludes again, as in some of her works, to the memory of the Russian artist Kasimir Malevich.
Year of completion 2015

Contemporary Polish BookArt
 Published on the occasion of The 43rd International Book Fair in Warsaw, Poland, 1999

Concept of the video:
The stages of creating an artist’s book. A performance is accompanied by overlapping images and visual windows where the work of an artist’s book is recreated. Finally, the words that emerge from the background of the video relate the main steps in the creation of the constructive process. 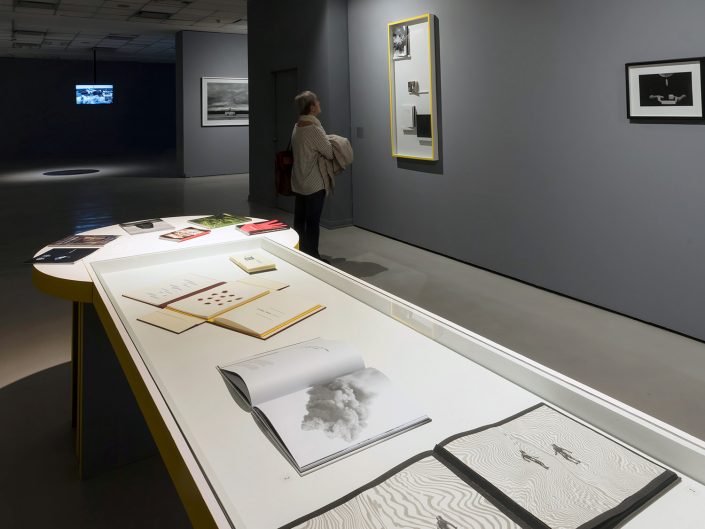 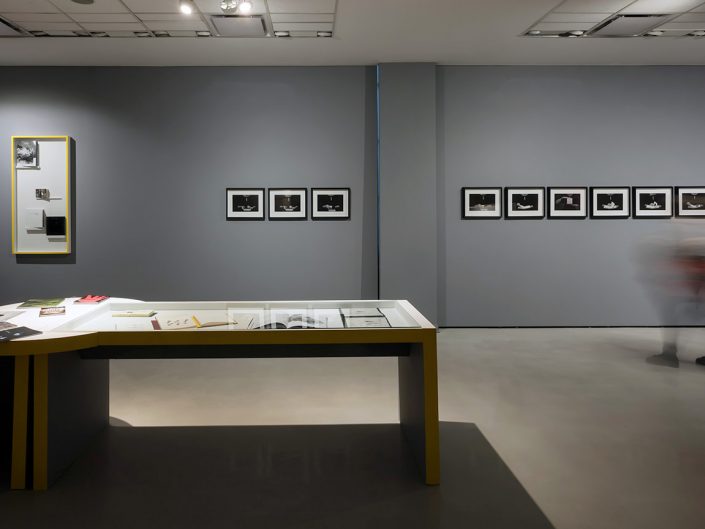 About the Artist’s Book

Currently the ARTIST’S BOOK has become one of the most interesting contemporary manifestations for visual art. The concept of the Artist’s Book is understood as a work in itself, which thus becomes the integral project of an artist. It opens a new panorama of images, experiences, forms, techniques, and allows the word to be blended with the artistic project itself.

The beautiful classic book illustrated sometimes with wonderful engravings belongs to a different family. In reality, the Artist’s Book is at its antipodes and proposes a new conception. Although it may sometimes have a simpler or less luxurious appearance, its project is much more ambitious. The Artist’s Book is, in its entirety, conceived by an artist who concretizes his or her ideas and directs their execution. In the illustrated book, the painter or draughtsman is, in Matisse’s words, a second instrument that must keep up with the writer and illuminate him. In an Artist’s Book the artist writes or chooses the texts – when they exist – produces the images and takes care of their design; it is in their interrelationship that its creative function finds full development. From the beginning, the artist chooses the different media based on their combinations and the relationships that he or she wants to establish and highlight. Many times this artist belongs to a new type of creators who are no longer just painters or sculptors, but who resort to unpublished and diverse materials, and who transform the book into a true alternative space, into an exceptional piece of their visual proposals.

A new generation of artists has abandoned the path of intellectual rigor and aesthetic asceticism that characterized the production of the Artist’s Book in its beginnings, for the seductions of a wide visual and tactile register. The limits established between the illustrated book, the artist’s book and the object book are often blurred. Many editions that are true works of art fall at the intersection of these categories and are sometimes among the best achieved and most prolific. This emancipation of the Artist’s Book from its conceptual origins translates into a growing number of publications with special formats, papers, bindings and assemblies: the Artist’s Book, being a paper book, to be opened and browsed, looks less and less like a traditional book.

Why I made “Myths of Creation

The Artist’s book “Myths of Creation” was born from looking and from a magnificent discovery for me. Many years ago on a trip to our continent and walking through the city of Bogotá, I visited the Gold Museum of the Bank of the Republic of Colombia, there I found a very beautiful text engraved on a large wall, a myth of creation of the Kogui people that inhabited and still does in the Sierra Nevada de Santa Marta in that country. I was moved reading that beautiful abstract myth that told us about the mother, about women and that involved the moment of the creation of the world in a unique way.

First there was the sea, everything was dark
There was no sun, no moon, no people, no animals, no plants
The sea was the mother
The mother was not people, or anything, or anything else
She was spirit of what was to come
And she was thought and memory
An intense text, valuing women and with expressive beauty.

On work or leisure trips, I usually carry a small notebook with me that allows me to record ideas, drawings and texts that will later come together in the devolpment of my works.

The unforgettable text that I recorded that noon in the splendid Gold Museum of Bogotá, remained with me for many years and when in 1994 I returned to that city invited by Arte Dos Grafico, one of the workshops dedicated to the most significant printmaking in Latin America, and it offered the opportunity of a residence to create an artist’s book, I automatically thought of the Kogui Mythology and that engraving hanging on the wall of the museum that I had enjoyed years before. That text was then the inspiration for the residency project and for the artist’s book “Myths of Creation”.

The artist’s book currently and for many years, constitutes a new space for reflection, a new circumstance where the book goes from being an element or a means of communication to becoming an object in itself, creating instances of absolutely specific and extremely creative.

The preparation of the Artist’s Book “Myths of Creation” had several moments; the first stage was in Buenos Aires where I documented the myths; making use of these possibilities, I spent several afternoons in the library of the Ethnographic Museum of Buenos Aires, where I was able to access specific yearbooks on the subject.

The book was worked on jointly with the engraving and book publishing artisans of the workshop. The great challenge was to give it a structure; I combined images and texts about the perpetual night, the Eskimo myth, creation rites, Guaraní texts that narrate the appearance of man and language, and finally the mountain, the Andes mountain range in blue that forms the backbone of our Latin American continent. Etchings and serigraphs technically integrate this book with a handmade paper cover.

Finally, the colophon describes the moment of completion of this work, which marked a turning point in my artistic production; a moment where I closed the stage of a very long trip through Latin America, speaking precisely of the creation myths of native peoples. “Myths of Creation” was finished printing in the workshops of Arte Dos Grafico in Colombia on the night of September 22, 1993 in a crescent moon. 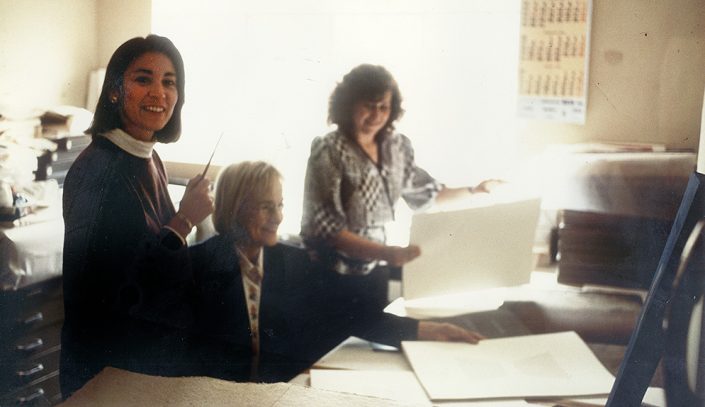 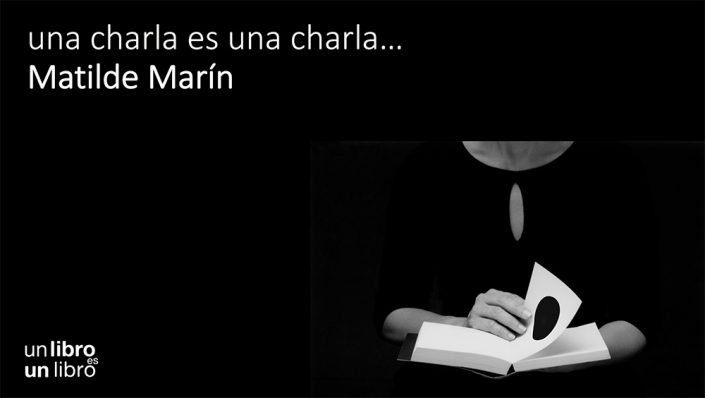