Series created at the beginning of 1994, in the early stage where Matilde Marín worked almost exclusively in printmaking. These walls, which emerged from the idea of giving the engraving monumentality, grew in concept and underwent transformations that currently allow him to cross these paper walls with different aspects of her production and video installation.
The first wall produced was Prospero’s Red Mantle, which took part in the exhibition that the artist dedicated to Shakespeare and his work “The Tempest” in 1994 at the British Art Center in Buenos Aires. 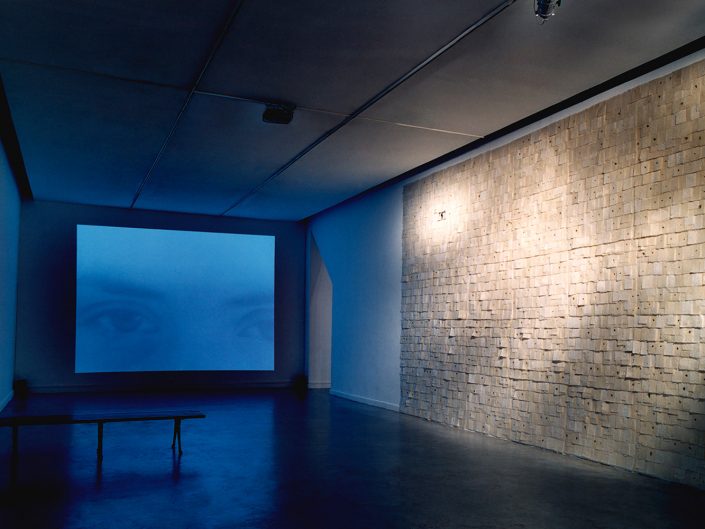 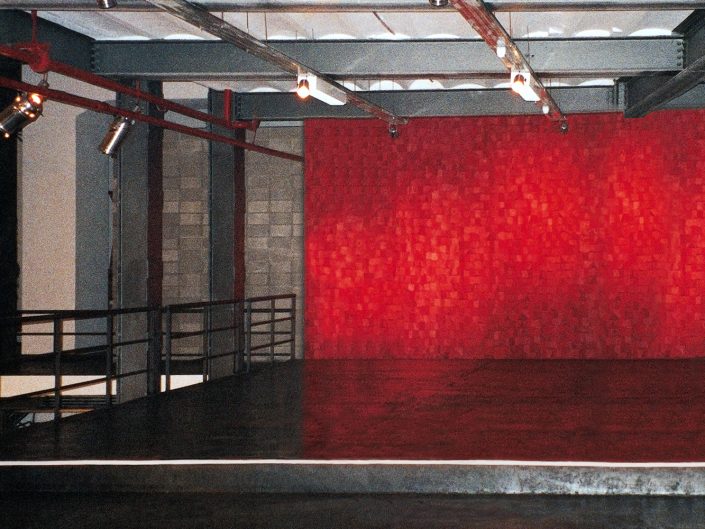 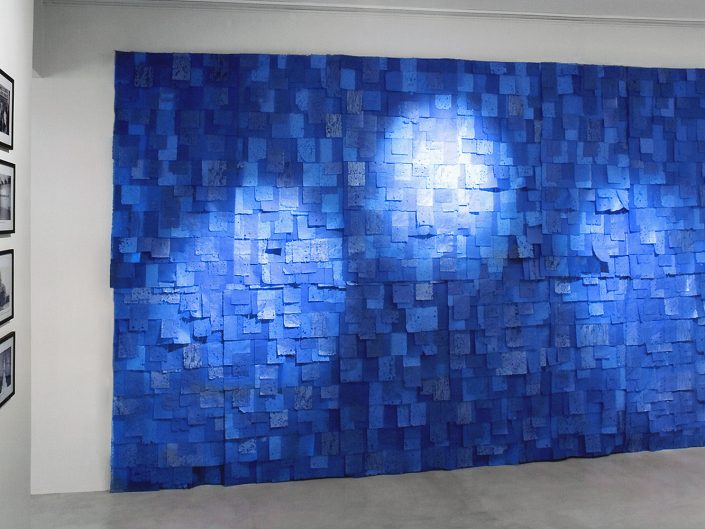 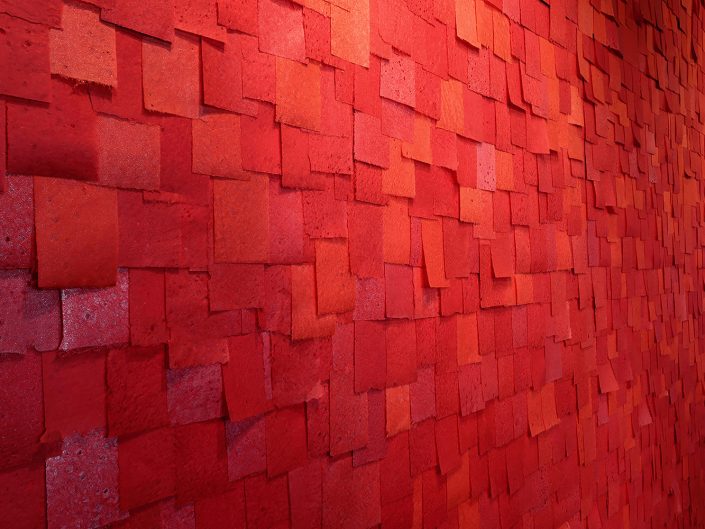 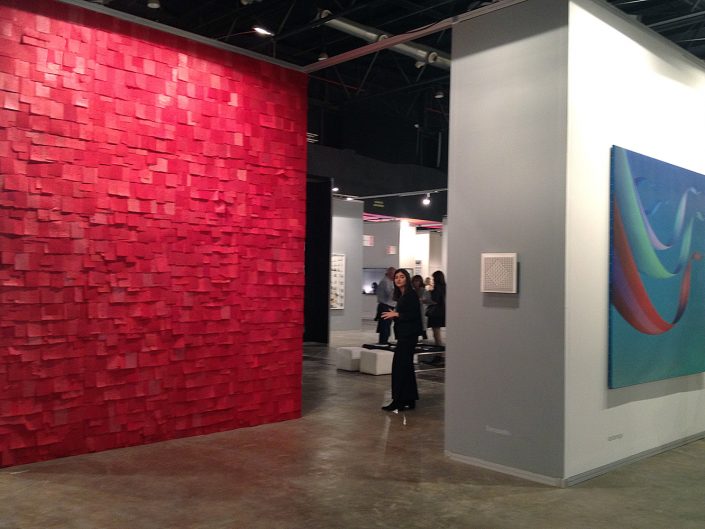 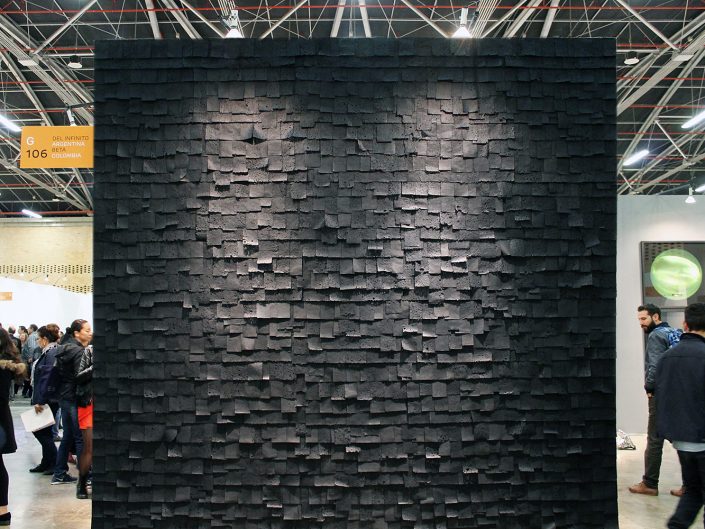 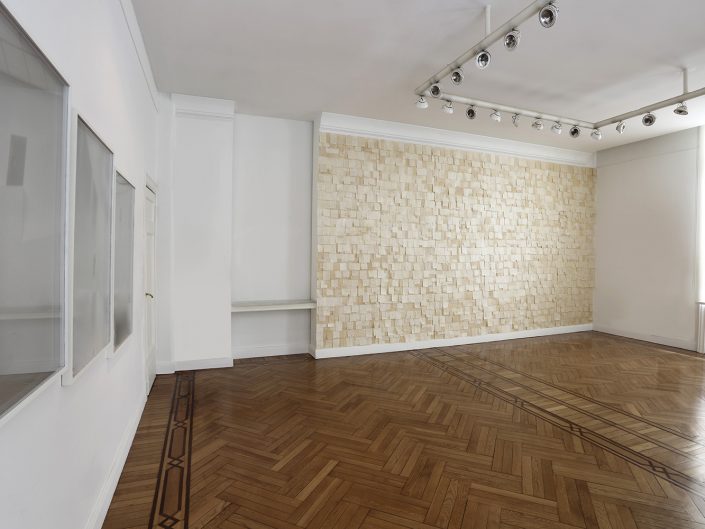 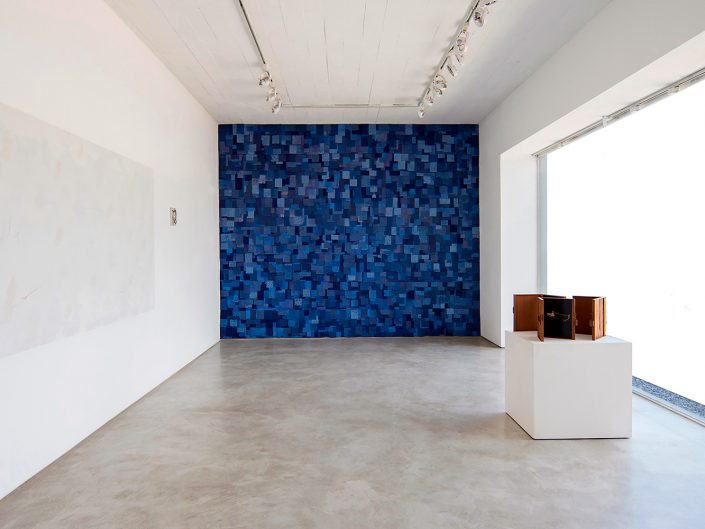 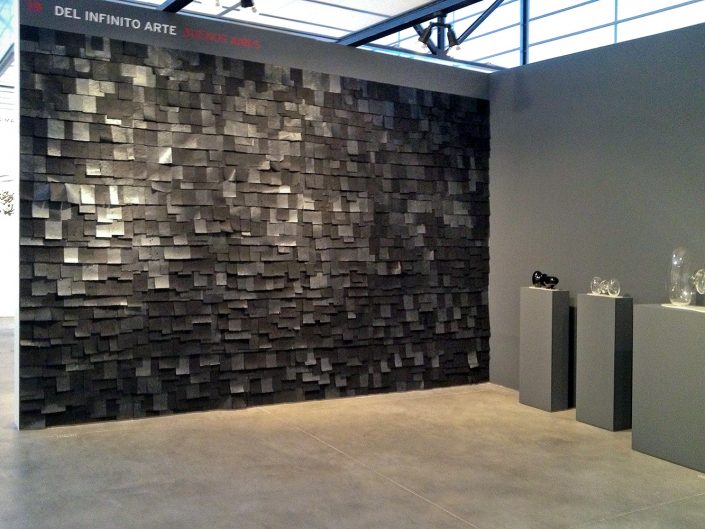 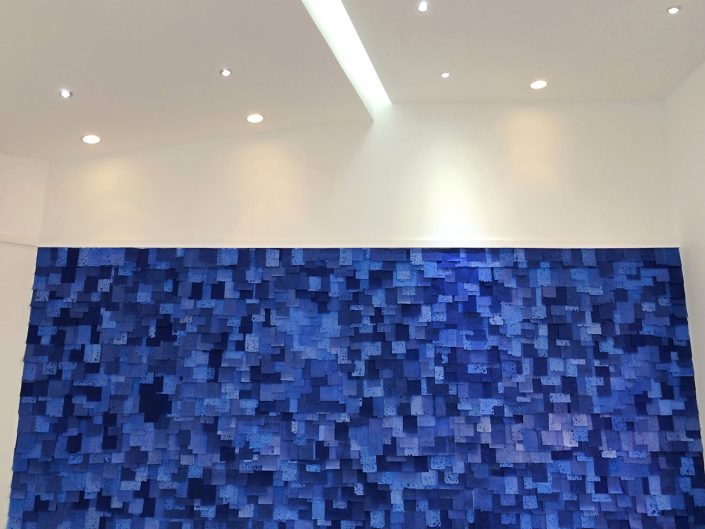 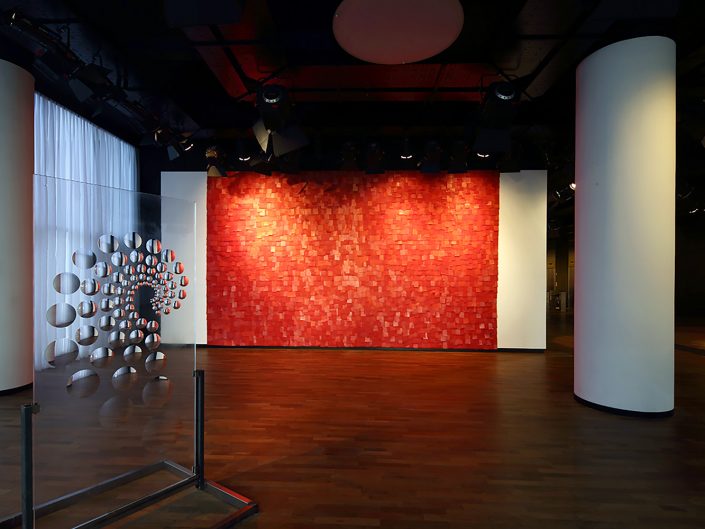 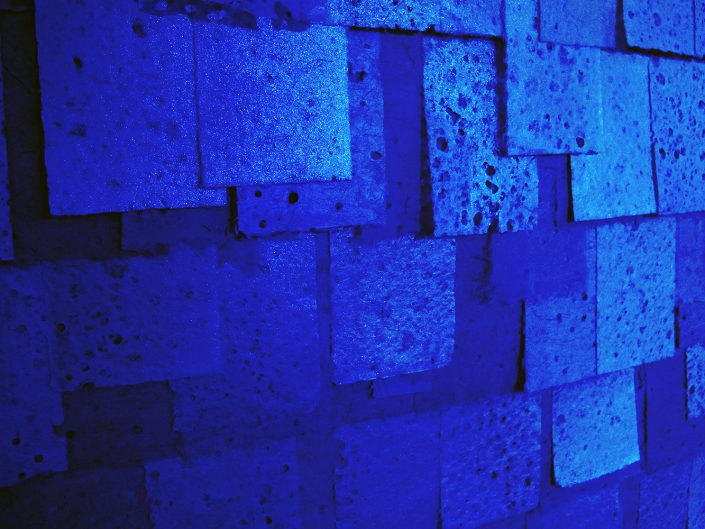 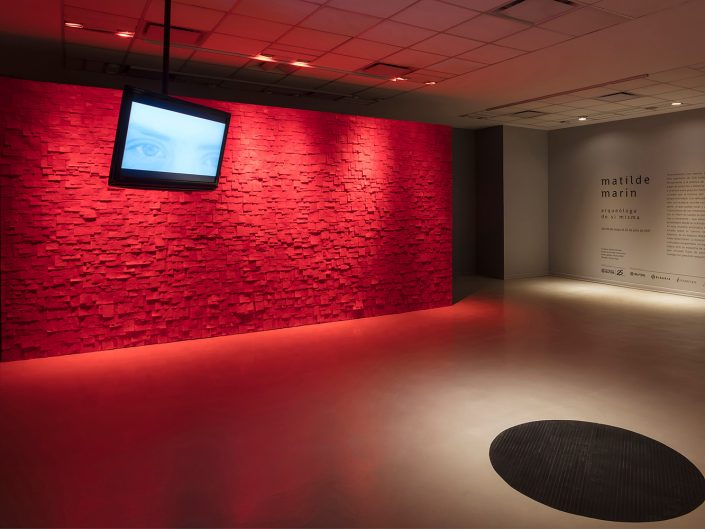 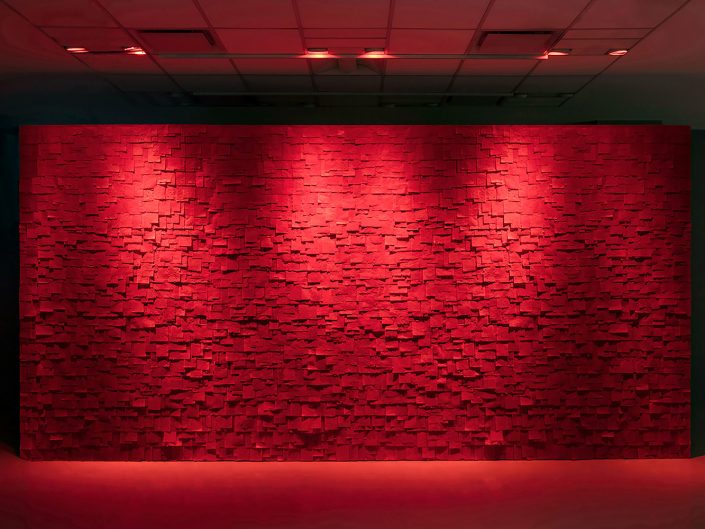 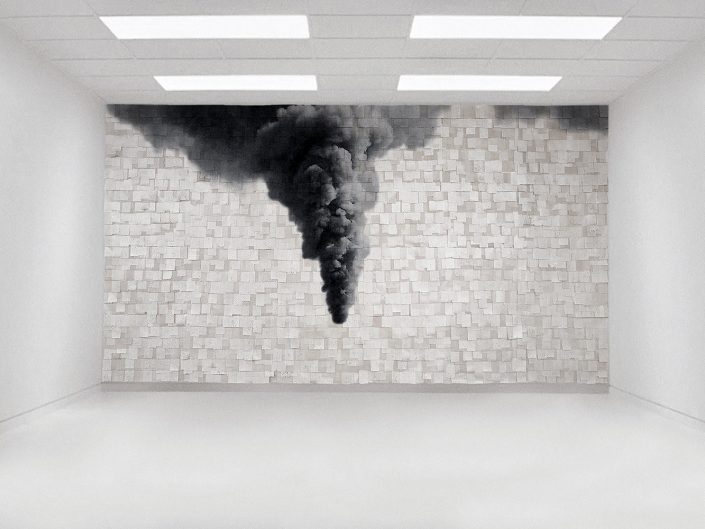 Concept of the video:
“Travesía” is a transit trip. It begins with the look of an almost adolescent woman and concludes with a face of an adult woman. The faces follow each other looking at the direction they should take, the itinerary to follow. They are the transits that force you to leave your place of life to emigrate. It is the necessary search for a place to live, to which it seems unattainable.

Prospero’s Mantle is based on the play “The Tempest” by W. Shakespeare where Prospero, the protagonist, is exiled from his duchy when he is involved in political affairs betrayed by his brother. Prospero is shipwrecked on an island where he engages in the arts of magic. Through a cloak that has the quality of making him invisible to humans, along with the adventures of a tragic hero, Prospero regains his dukedom.

Matilde Marín draws inspiration from the Shakespearean masterpiece to use her wall as a magical mantle of protection and shelter for contemporary humans, in the face of the political vicissitudes of our society. A protection that means that nowadays in the urban world, we need ourselves to harvest and collect, in order to survive.

Prospero’s Mantle belongs to the Series of walls that the artist has developed since 1997 as a non-traditional graphic work, in order to distance printmaking from statism in its usual media and transform it into a real space that includes and engulfs the viewer due to its format, monumentality, color and technical detail. The artwork is made up of a fabric where modules of multiple small papers created under oriental techniques are placed and later, burned or perforated.

Breaking down the time, reinventing the journey

Prospero’s Mantle (1996-2013) also alludes to a journey, but here it is a journey marked by setbacks and condemned to shipwreck: it is the voyage of exile, from which the main protagonist -in Shakespeare’s “The Tempest”- emerges willing not only to survive but to twist the forces of destiny in his favor. To do this, he uses a magical device: a cloak that gives him invisibility and, with it, special powers that he cultivates until he masters them. Escaping from the sight of others and at the same time seeing everything is the attribute of the gods. His plan accomplished – the lost order restored and his daughter’s happiness assured – Prospero abandons his mantle. This, already deprived of its faculties, is symbolically recovered by Matilde Marín: in her hands it is revealed powerful and delicate, red with passion in its light body -made of time scales that react to the minimum stimulus-, capable of conjuring cosmic calamities and individual passions, not by magic but by virtue of their extreme beauty . We could say that Itineraries is also a cloak, but made of shadows that pierce the image, just as that of Prospero exhibits perforations in its fragile matter.

Text excerpt from the curatorial essay for the exhibition “Matilde Marin Archaeologist of herself” Fundación OSDE, Art Space, Asunción, Paraguay, 2017

1. Prospero’s Mantle is part of the Series of walls that Marín developed between 1996 and 2013. Monumental in size, these “walls” are made up of hundreds of small sheets of very fine handmade paper, slightly perforated and arranged on an invisible fabric. 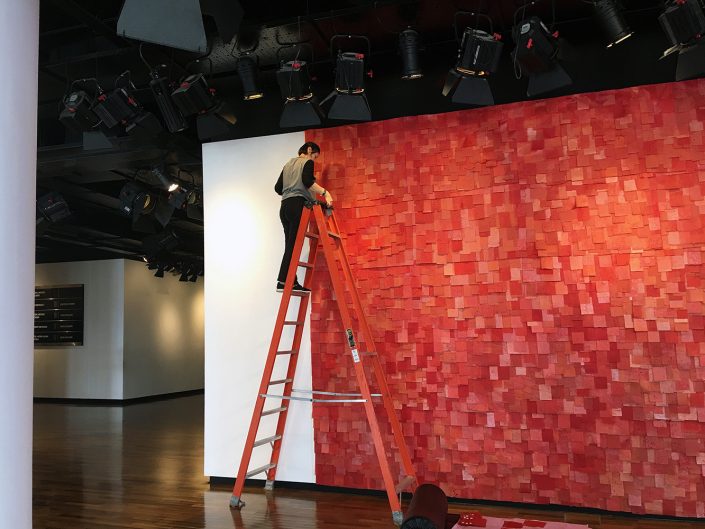 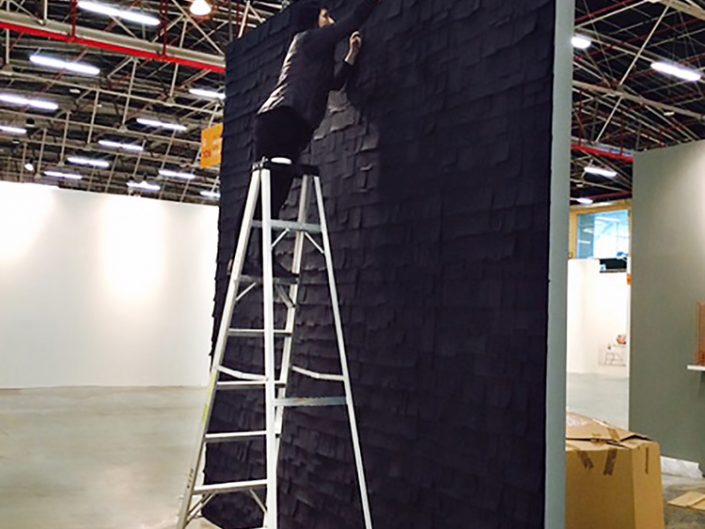 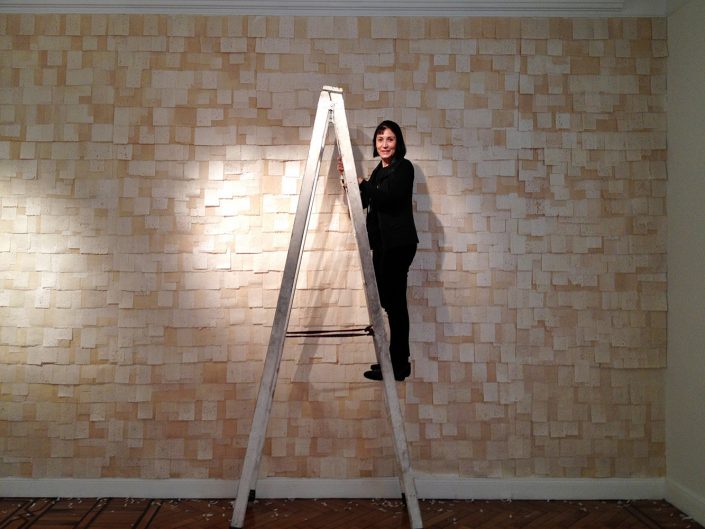 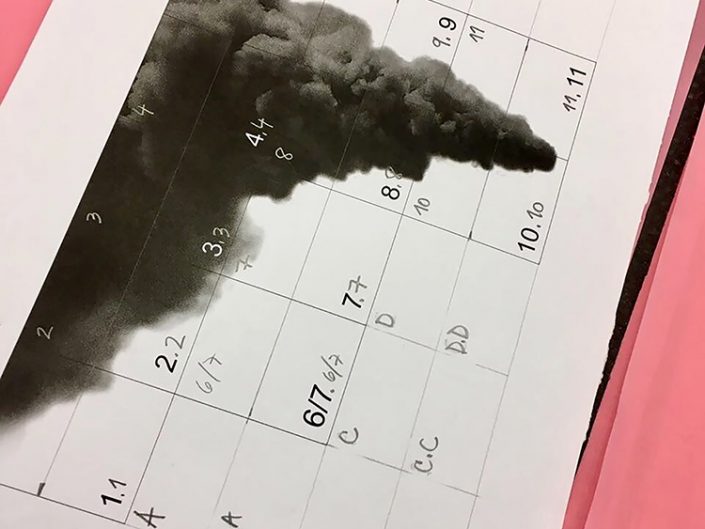 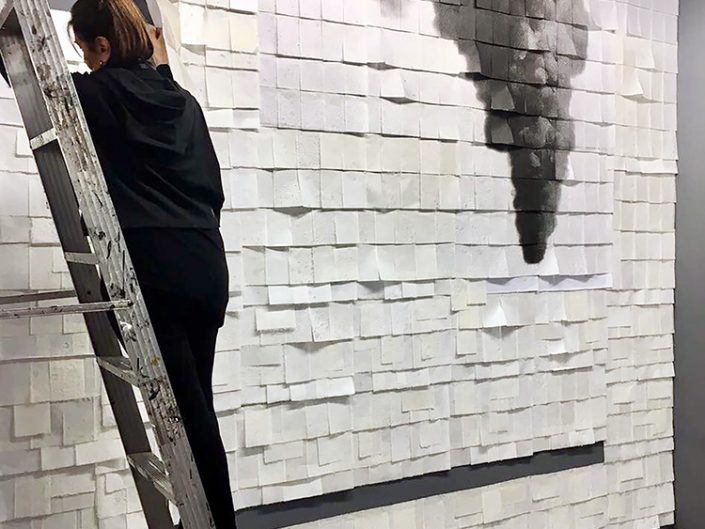 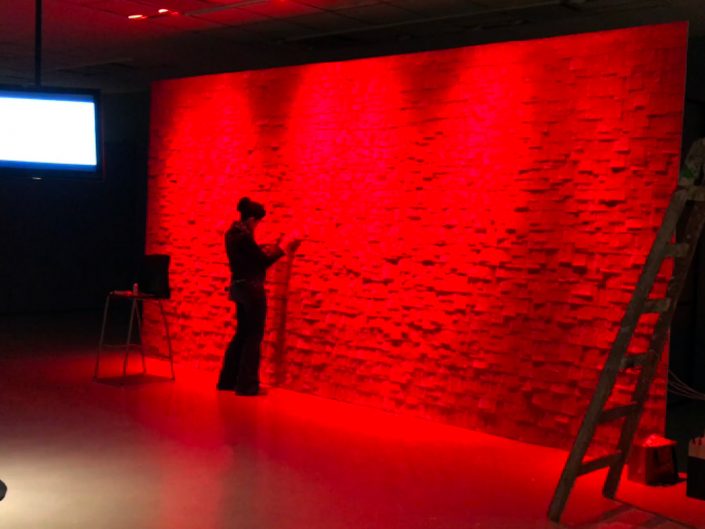